The most strikingly attractive airplanes ever built

Beechcraft’s Duke is widely regarded as one of the most strikingly attractive airplanes ever built. Unfortunately, it’s not a very good performer. Hobbled by a poor engine and propeller combination, the Duke’s claimed 760 horsepower is a figure that lives only on paper. Much of that power doesn’t translate to thrust at the propellers. With similar horsepower, the bigger, heavier Cessna 421 noticeably outperforms the Duke.

Rocket Engineering targeted the airplane for conversion to turbine power in the early 2000s and renamed it Royal Turbine, to be marketed by offshoot company Northwest Turbine LLC. 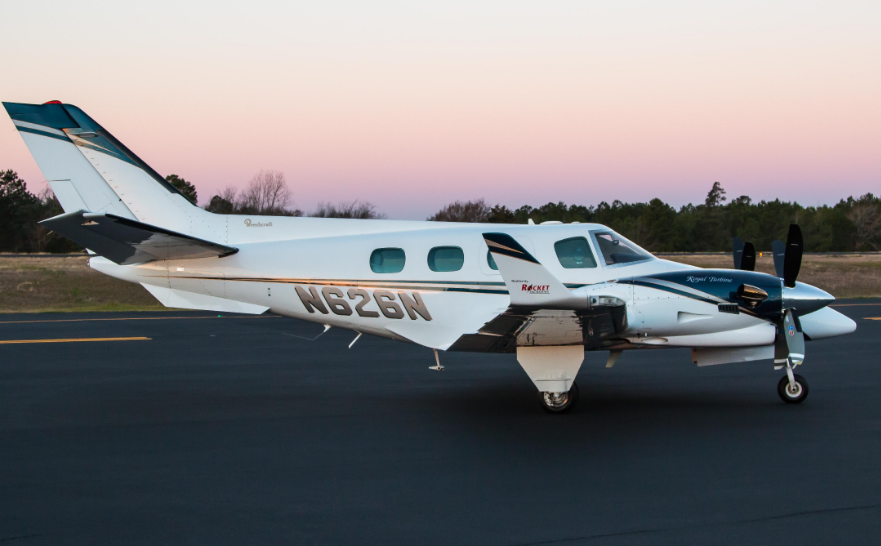 The Royal Turbine removes the heavy, inefficient piston engine and propeller combination, replacing them with lighter turbines utilizing slim nacelles and creating a total of 1,050 shaft horsepower. The result is a transformation of a wheezy airplane to an all-out screamer.

Climb performance, too, is spectacular. We reached FL280 in 12 minutes. As in all turbine airplanes, flying high is critical for range and efficiency. The Royal Turbine climbs so well that there’s no excuse not to fly high. This leads to a limitation that affects all piston-to-turbine conversions. Since turbine-powered airplanes don’t have a yellow arc on the airspeed indicator (maximum structural cruising speed), the FAA requires that the beginning of the yellow arc becomes the redline. In the case of the Duke, 198 KIAS is the new redline.

With its abundance of power, the Royal Turbine is effectively always flying at redline. At altitude, however, this translates to cruise speeds in the 270- to 290-knot range. That kind of speed can be reached flying in the mid-20s and will consume about 70 gph. At its reduced vertical separation minimum-limited ceiling of FL280, expect 280 KTAS on about 66 gph. The Duke’s pressurization system is only able to hold a 12,000-foot cabin at FL280, however, which makes supplemental oxygen a good thing to have.

Need to get down? Pull the power levers to idle and you can descend at 4,000 feet per minute. Likewise, with reverse thrust, you can touch down and stop in 1,000 feet. This Duke is comfortable using runways as short as 2,500 feet, opening up airports that piston Dukes would never use.

Like many turbine conversions, fuel capacity is a challenge. Northwest Turbine has stuffed fuel bladders in nearly every empty cavity of a Duke’s wing to bring fuel capacity to 282 gallons. With the turbines, worries about preheating, cold starts, and thermal shock are gone. TBO is 3,600 hours instead of about half that time for the Lycomings. Overhaul costs are substantial, for sure. Each PT6 costs about $250,000, compared to the Lycoming’s $60,000. Nobody said turbines were cheap.

Conversion cost is $999,000 for the more powerful -35 engines. A lower-cost option uses the -21 engines and costs $890,000. It’s a little slower and uses less fuel. So far 20 Dukes have been converted to Royal Turbines. Company President Darwin Conrad has some recent upgrades in the works, such as an aerodynamic cleanup, new engine gauges with trend monitoring, and new scimitar propellers. He’s pushing for a 300-knot top speed, which is about 90 knots faster than the piston version.